The government of Indonesia in August 2019 announced that it will introduce a total ban on nickel ore exports from January 2020 (the introduction of this ban was previously planned for 2022). Nickel prices on stock exchanges have soared to levels not seen since 2014, and the volume of declared exports of raw material increased almost three times. There are suspicions that, contrary to the current ban, ore with nickel content exceeding 1.7% is being exported from the country.
Therefore, on last Monday (28.10.2019) exporters in agreement with the Government declared that they would immediately stop exporting nickel ores until the irregularities were resolved. This short-term ban will be lifted within 1-2 weeks as soon as the investigation is completed. During this period, domestic steel mills will buy raw material at international prices, the ministry will most likely introduce ore price regulations that will apply after the total ban has been introduced.
Recent Government efforts are aimed at accelerating the construction of the processing industry in Indonesia and attracting capital that could be invested in the production of batteries for electric cars. Unfortunately, recent unannounced and chaotic actions are causing investors to perceive this area as uncertain. It is also still unknown how nickel prices will behave on stock exchanges, trade is difficult.
The Indonesian government has been trying for years to encourage entrepreneurs not to export metal ores, but to process them on site. Therefore, in 2014 a total ban on nickel ore exports was introduced, which was relaxed in 2017. Exporters got permission to export ore containing up to 1.7% nickel. In 2022, a total ban on nickel ore exports was announced, but in August this year it was accelerated to January 2020. 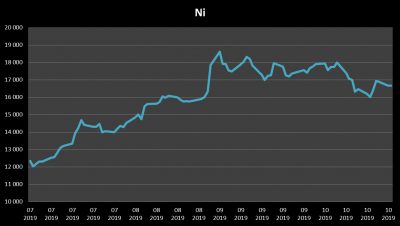